I stayed at one of the best hostels ever in Dunedin, Chalet Backpackers. The rooms are big and airy and have harbour views and it’s cheap. Big kitchen, big long table in the dining room for chatting with your neighbours. Listing the details doesn’t do it justice, really. The point is it feels like a home from home here and the people who run it are extremely friendly and helpful. (They are not paying me either, this really is a lovely place!) Anyway, this is where I made my home for four nights.

People often say that Dunedin feels very English. It has Scottish roots actually, amongst others, and my understanding is that Dunedin is the Gaelic for Edinburgh. But what you need to know about Dunedin is that it is very, very, very hilly. Like San Francisco hilly. In fact, it boasts the official steepest street in the world. I went up on a hot afternoon. Yeah, pretty steep but I seem to have developed insane walking skills (or just plain insanity) so didn’t bother me!

In fact, after a coffee in the cafe of the botanic garden I found another really steep road and walked that for awhile to try to get to a viewpoint that some people had told me about over dinner the previous evening. I didn’t find the lookout but I did get up high and sweat a lot and get a nice sunburn on my hair parting (that burn’s peeling now, nice and flakey). The botanic garden is very big and a great place to pass some time. One highlight for me was the aviary where I saw various exotic birds including two African grey parrots who have learned to wolf whistle. They demonstrated for me. Nice work, guys.

The day after the hot, climbing day was freezing and rainy. I of course left the hostel wearing summer clothes and proceeded to freeze. I did start to wonder if this was Britain…but the the Kiwis will tell you their weather is changeable too. Luckily, I fancied visiting the Dunedin Public Art Gallery, which is a beautiful space to view art. They had some very interesting things indeed, including a Tom Kreisler exhibition which I found intriguing and amusing. Later in the day I put on many more clothes and went on the Elm Wildlife Tour to the Otago Peninsula to get up close with some of the area’s wildlife. We saw royal albatross, some sea lions, yellow-eyed penguins and yet more New Zealand fur seals (always a pleasure), plus various birds including oystercatchers. 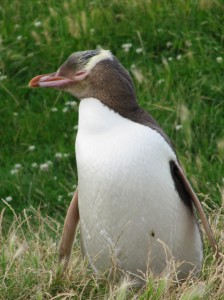 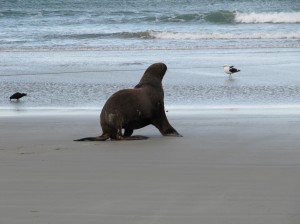 My last full day in Dunedin was devoted to getting my arse into gear trip planning-wise. Following much behind-the-scenes drama I had now decided on a rough plan for the final less-than-two-weeks of my trip. I was headed to Oamaru just an hour or two up the east coast to see the blue penguins. Then to Christchurch to fly to Wellington. From there various versions of North Island itineraries float like geographic gumdrops before my eyes. But more of that later.

Sunday was also Chinese New Year, as I am sure all are aware. Dunedin’s Chinese Gardens were open for free that evening and there were lion dances and the like, and to top it all off fireworks. I went along with a Kiwi roommate of mine, where we were initially underwhelmed by the ‘launch of the lanterns’ we’d had advertised to us. But then we had the dances followed by some truly vibrant fireworks! You can’t get tired of fireworks. Happy Year of the Tiger, everyone.

Before catching my afternoon bus the next day I explored the shops a bit and drank some coffee (Dunedin has a very strong cafe culture – now you have many facts about the city; just ask for more, anytime!) and then visited the free Otago Settlers Museum where I learned more about the heritage of the place. My favourites were the room that was set up like the – what do you call it, cabin? – where people who were coming to settle would have slept in bunks and taken their meals on the long sailing voyage to get there, and also the transport gallery. There is a penny farthing bicycle there you can try out by climbing up some steps but I was too chicken to do it without an accomplice. (I felt similarly when sitting in a city park and eyeing up the zip slide and other intriguing equipment. Ah, there are unexpected drawbacks occasionally to travelling solo! And why do we have to be ‘too old’ for certain things anyway?)

I eventually dragged myself away from all these diversions and took the bus to Oamaru. Now the big draw in Oamaru is the blue penguin colony. So first stop was the hostel (another friendly place complete with Tigger the cat), then to the i-site for info, ended up booking tickets for the evening ‘viewing’ of the penguins with a guy from Hong Kong who’d I’d met when we discovered we were both heading to the same hostel. Then we both felt like a walk so followed the ‘skyline walk’ to get some views of the city and harbour. The route also dips into forest, including some native bush. Here’s a view of the harbour and some cabbage trees. They have a lot of those in Otago but I don’t know why it’s called a cabbage tree:

At some point I found a ready-made club (or is it a back scratcher?).

For dinner, I had fish and chips and Tigger tried to charm me into giving him some. No such luck, kitty! Then to see the penguins. Do not expect any photos here as people are not allowed to use cameras within the viewing area, and you can only use one without flash outside of there (in the dark), so use Google image search instead. Blue penguins (also found in southern Australia, where they call them fairy penguins) are the smallest species of penguins. They are also the only ones to have blue and white feathers rather than black and white. The ones who have been out at sea fishing all day band together into ‘rafts’ for safety as it starts to get dark and then arrive on shore together. At the Oamaru colony we watched each raft come up out of the water, preen their feathers and shake the salt out of their faces, and then eventually make their way up to cross over the the nesting areas in groups. They move in the determined way of penguins on land, leaning forward and inducing smiles. I love ’em. They also make a racket as they call to mates and tell off anyone who tries to poke their beak into their nest burrow. As you leave the evening’s viewing you can look out for penguins in the car parking area, as some of them nest out that way in burrows or under buildings. We came across a few and watched them but unfortunately it was far too dark to get a decent photo.

Today I came to Christchurch on a full-up bus with very little leg room. My ipod served me well – so glad I remembered to transfer it from backpack to daypack before I boarded, life saver. The journey had an extra element of excitement as my Travel Companion Extraordinaire was in town as well (I describe him as such, as I know now he’ll be reading, having discovered this to be the idea way to remember all the best bits about our camper van trip – hi there). We found each other and I dumped my stuff at the hostel, then had to feed my flat white addiction. Chocolate fudge cake added itself to the proceedings, but this was not instigated by me. Boys and chocolate, eh! After this the sunny afternoon needed to be honoured further by a walk in the park. We found ourselves in the botanic garden and there was absolutely no silliness at all.

Now time for pizza and a beer. I’ll miss ya, J, you big…thing. But will defeat you in our tennis rematch in Bristol…

End of internet session. Logging out! 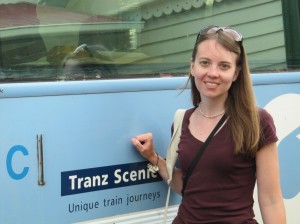 Train journey was good, got a great view of the north island scenery. I enjoyed spending some time on the open-air viewing platform during the trip, feeling the wind in my hair. Sometimes we were sunk down amongst hills and woodland, at other times we soared above via viaducts and bridges. The crew changed over the course of the journey – I guess my favourite had to be the Wellington crew as the guy who was giving occasional commentary had quite a dry sense of humour which amused me. E.g. at Hamilton, where we could get off for a few minutes for “some fresh air or a toxic cigarette…” (Well, maybe you had to be there. Anyway.)

So Wellington. Met up with Jode, stayed in a hotel for a couple nights which was such a luxury after hauling my stuff from hostel to hostel for the past week or so. Tried out a few cafes and a pub (Wellington apparently has more cafes and bars per capita than New York), visited Te Papa, the national museum, enjoyed nice weather (I brought the warm, dry weather with me I guess, as it had been rainy and windy here before I arrived), and today am taking the cable car up to have a stroll through the botanical gardens before it’s time for the bus to the airport. 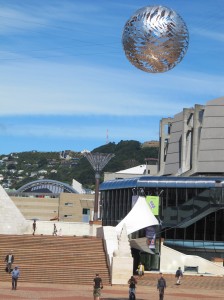 So on to Christchurch, where we pick up the camper van tomorrow…