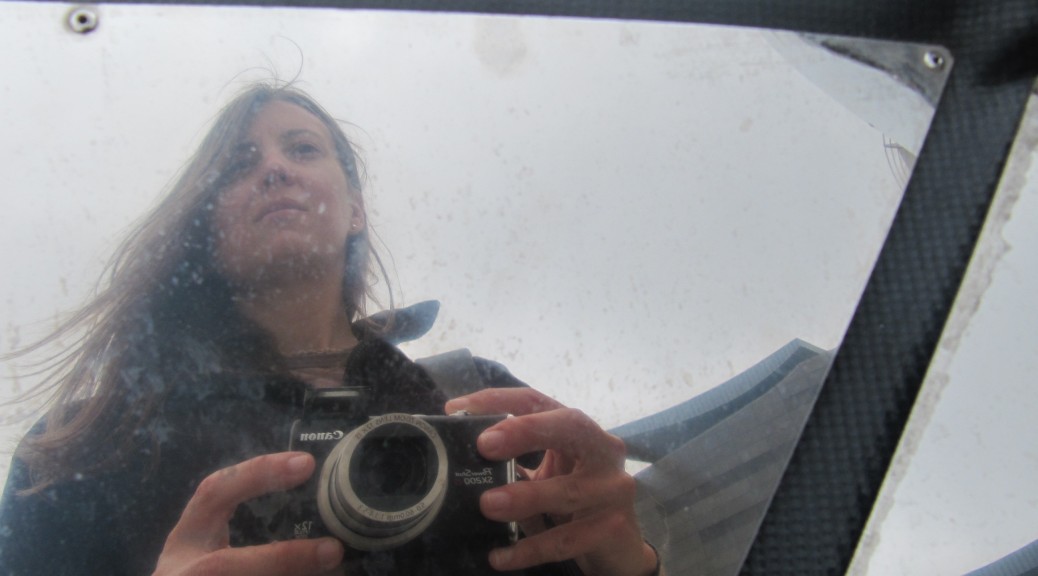 What can I say, you were fantastic. You provided the perfect setting for me to explore my own sense of adventure. Life will never be the same again after this trip, so thank you for being a part of it. I am more centred than ever before. And my world feels better.

Mt Maunganui was very pretty. I enjoyed that more than central Tauranga. I thought it was hilarious when you sent a horde of insects that looked like sandflies to afflict me as I climbed the mount in the blazing sun, but maybe they weren’t actually sandflies. At any rate, I don’t see any new bites so possibly it was a practical joke?

It amused me to see a local brochure bragging that a ‘leading guidebook’ says that Tauranga is about as Riviera as New Zealand gets. I know for a fact this was Lonely Planet because of course that is the guidebook I am using. What I want to know is: were the LP authors being catty? I initially thought so but Mt M is pretty good, I have to say, and it was nice to see the sea, as always. You know I’m a fan.

So onwards to Auckland this afternoon. On the express 4-hour bus with no toilet breaks. (Contrary to popular rumours, I am not obsessed with toilets. I’m just saying.)

Before I go, I just want to say how I adore your public toilets with the flashing lights, and the ones with sliding doors (not obsessed), your roadside signs bearing public service messages such as DRINK DrIvE (it’s a visual thing, that one), the funny vowels and expressions of your people (‘sweet as’), your amazing wildlife of the sea and land, including the sometimes suprisingly loud birds and insects (but not the sandflies, even when they get into my ear so I can hear them buzz)…oh, and so much more.

And now, uh, I’d like to thank the South Pacific Ocean and the Tasman Sea, Wanaka for being being there for me, the whole South Island for being magical and the North Island for being pretty damn cool (and hot!) too. And thanks to friends new and old, and anyone reading. I know I’m strange but you chose to read this. By the way, this blog doesn’t end here. ‘You’ll never see the end of the road while you’re travelling with me.’ (That’s from a song by Crowded House – I was quoting this at some point in my trip, and then this morning they played it in the cafe where I was sheltering from raindrops…)

‘One’s destination is never a place, but a new way of seeing things.’ (Henry Miller)

So we made it to Milford Sound, on a day tour by bus with a cruise on the sound at lunchtime. Fiordland is so raw, the scale of the earth brought home to me in this landscape carved by glaciers. As for Milford Sound itself, it will perhaps always for me be associated with a sense of sadness and loss (or a memory of such, one day) and with, of course, sandflies. My face was still swollen. We chatted with the crew, who sympathised with my plight. A bite to the eye of lip will often swell up frighteningly (and very unbecomingly). In my case it was just a longer plight due to allergic reaction. (But as I write I am quite recovered from this particular suffering!)

It is a beautiful place, somewhere that the mist becomes. It is serene but there is life there – seals, and a rushing waterfalls, one of which the boat approached so closely I stood in a wild shower, laughing as I filmed (hoping my camera would forgive me the dousing). (Maybe I’ll post the video sometime…)

The next day we set out from Te Anau for Wanaka. I would be staying on in Wanaka, while my travelling companion of three weeks would continue on to Christchurch, over the next couple of days, to return the van to its starting point. My plan was to spend some time in peaceful Wanaka then to carry on to Dunedin to avail myself of the wildlife dense Otago Peninsula. From there I was (and remain) uncertain as to what my next moves would be as I made my way back up north.

I love the sea but have found a different sort of beauty, one I did not immediately fully appreciate, here in the lakeland setting of Wanaka. I have done some fantastic walks around, and overlooking, Lake Wanaka and the surrounding landscape. I have gone kayaking on the lake (by morning, so peaceful, and also so amazingly energising). I have met fantastic people in my hostel (YHA Purple Cow, check it out when you’re next in town…they show a movie every night at 8pm!) from all over the world, have had glimpses into other lives…and into my own life as well.  Remove yourself to another place and you may leave the mundane but you take yourself with you. Of course, you say…well anyway. I must stop now, nearly time to gather my bags from the hostel and catch my bus to Dunedin and leave this pretty place. 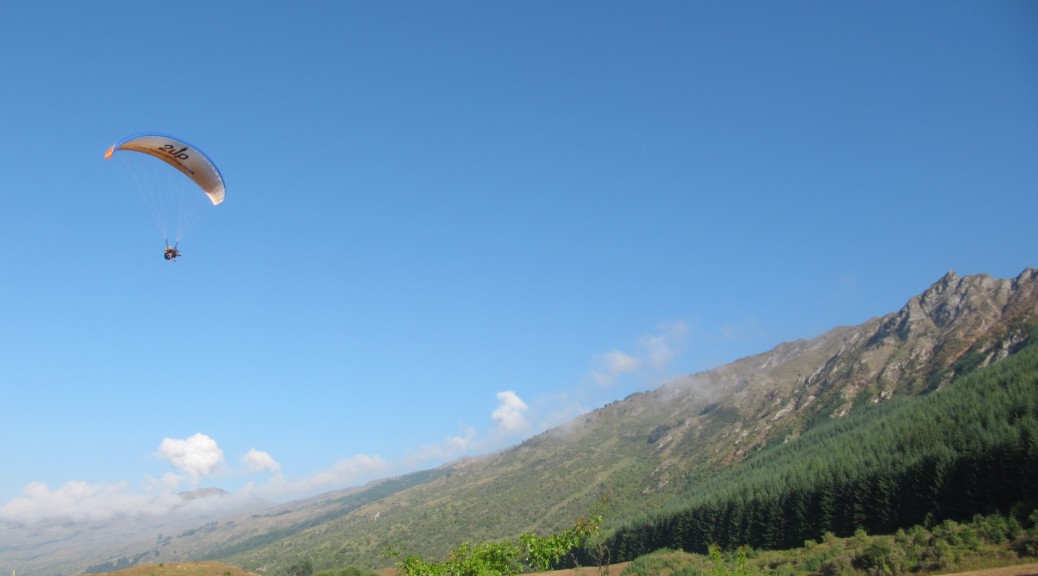 The time in Franz Josef was good – a bit of a chill-out time, hanging out with the ‘gang’. That horse trek never happened, though, a casualty of the difficulties in trying to coordinate a number of people’s schedules. J and I explored the local area and attempted to swim in the sea, which was hit us with stones, and in Okarito lagoon, which was surprisingly chilly. Found other forms of outdoor recreation, then returned to the village to arrange an overnight stay outside the accommodation where our friends were staying. The woman in the public bar said they were happy for us to park up and pay a fiver for a couple showers. That was until the next morning when, having just thrown open the camper van doors to get some life affirming cool air, we heard the crunching of gravel and were accosted by a man claiming that the owner didn’t want us there and it was lucky he was away or he’d be towing us away. Seems you just can’t win sometimes. But we were able to depart unscathed.

We decided to go have a look at Fox glacier. So here it is.

Carried on, following another of those lovely twisting roads, stopping off at a salmon farm/cafe for lunch and coffee. They did some tasty smoked salmon there. Through Mt Aspiring National Park, past beautiful waterfalls,

and Lakes Hawea and Wanaka, finally arriving at Lake Hawea village to stay for the night. Was hot, hot, hot well into the evening. Did some laundry (ooh) and cooked some dinner (aah), and later on went for a walk. It was very, very quiet where we were (gosh, it was quiet) and there were many, many stars to be seen. I can now find the Southern Cross very easily – those pointer stars do what they’re meant to. Go stargazer Trace.

Next morning it was a short drive into Wanaka, a chilled out lakeside town. We did the fuel, groceries, ice for the cooler routine, then paid a visit to Puzzling World. Very good fun those illusion rooms. You can create your own illusions too, if you are as clever as I am (ha ha) and also get totally caught up in the devilish puzzles they leave out in the cafe area (and not get at all frustrated when you can’t solve them, if you are as clever as I am, uh ha ha).

Next we came across some tennis courts and as for some reason we’d challenged each other to a game of tennis we needed to finally stop and do it, before time was up. My injuries and the amazing heat kept me from being the amazing player I normally am (ahem) though someone else claimed that it was also down to the superior upper body strength of one of the contenders. Well, I took on a trucker at sport and lost, but it is time I shared with my readers one of my great sources of pride on this trip. Kramer has muscles! Sorry I have no posing picture to share, but trust me, a combo of lugging things around and doing things like kayaking have given me muscles that even the sarcastic trucker admires.

Another highlight of my travels has been good fresh fruit, often procured from side of the road stalls (e.g. big fat cherries in Wanaka, yum).

But what you really want to hear about is how I came to be in the sky. Well of course I did that tandem paraglide mentioned before, flying from Coronet Peak near Queenstown. Here I am getting ready to go… 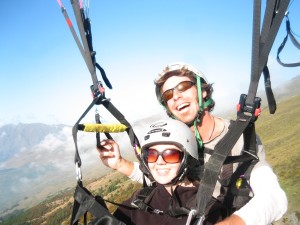 and here we are coming in for our landing (which followed some wonderously fun spins in the air, but unfortunately those bits didn’t get captured on the video): 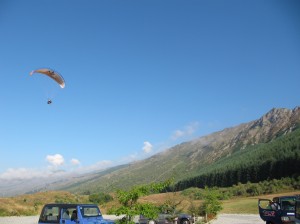 I have some other videos (filmed by the trucker) that I will try to add at another time. For now, all I can say is when can I do it again?!! Ace.