Just catching up with myself here…

My last night in Auckland I met up with my friend Joanna, who had finished her Magic Bus experience. We were both leaving NZ the next day, she being off to Sydney and I of course being LA-bound. We were staying in rival mega-hostels in the city centre but had coordinated our meet-up days earlier from Rotorua. It was more complex an operation than you might think, as her phone didn’t work in NZ. So I had to check in to the Surf ‘n’ Snow then find my way to the Nomads Fat Camel before we could explore the food ‘n’ drink options available. It was nice to have someone to laugh with on this last night.

And the Sky Tower looked kinda cool all lit up at night:

Next morning I had a bit of time to stretch my legs so I wandered into Albert Park and discovered a festival of lanterns. 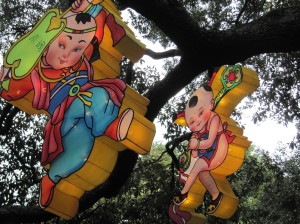 I also saw some trees that seemed enchanted 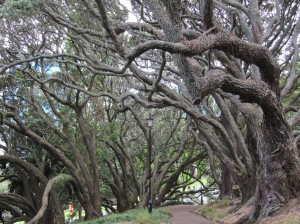 and a building society sign that reminded me of the night sky.

Soon enough it was time to collect my trusty backpack from the hostel and once again catch a bus to an airport. On my flight to LA, I had a neighbour who was spending a year travelling the world. I took a few suggestions for my next big trip…

But back to the current trip. I had yet another flight to catch, a short jaunt to Phoenix. (Where my mom and brother were late to pick me up! They had a very good excuse, though. Mom, if you’re reading this, I’m only mentioning it to make you cringe! Heh heh… The worst part of the experience was when an evil phone ate all my quarters. But I digress.)

Then had a few lovely days in Tucson with family. Kicked myself that I hadn’t brought my AV cable for the camera with me, as with that I can do beautiful slide shows of my escapades on my grandma’s big TV. And you can’t just go and buy one of these cables. Three words: wild; goose; chase. Watched the Lord of the Rings films instead. (“I was there. And there. Oh yeah, and that bit was pretty. You saw the photo of me with Mt Doom, right?”)

Then, guess what, I got on another bus (shuttle) to the airport and flew from Phoenix to Heathrow. Ah, that old familiar flight. Except this version was delayed by two and half hours, so we departed at 11:30pm and arrived late afternoon the following day. (Flight attendant: “The hours of daylight are approaching rather quite quickly so if those passengers in window seats would close the window shades…”) During the flight the guy at the other end of the row from me (we had two empty seats between us) invaded “my” one of the empty seats with his feet. Grrr, my empty seat, get off! I am normally a really non-irritable person but that foot got some hard stares from me. Yeah, I’d pull up my silk eye mask and everything, just so I could really scowl at it in the dark. But I don’t think it was the foot’s fault really, I just wasn’t going to get much rest on this particular flight.

So then I re-entered the UK. They seem quite used to me by now, I hardly get questioned at all by immigration. But I wasn’t heading onwards to Bristol just yet. I would be staying in London, first in Shepherd’s Bush with a friend, and then in Muswell Hill for a very special weekend workshop.

I was really looking forward to a lot of things. Not least some sleep!