Flight up to Wellington was rather a non-event but it transplanted me nonetheless back to the North Island. Managed to jump off my bus at the right spot for the YHA, then after checking in went for a somewhat mirthless walk in the city (sorry but the weather was bleak and I felt a bit off).

But when I returned to my room I met one of my roommates, from England and a similar age to me, and we got on great. I invited her to share my stir fry (one of about two specialties of my hostel cookery) and then we thought we’d go out for a drink. Now Welly is supposed to be all cool and it is but I felt a bit less than cool as the night continued.

Check us out. We thought somewhere with live music would be good but then the place we thought sounded good wouldn’t let you in if you had a water bottle in your bag. We couldn’t ascertain the reason but moved on and were given vouchers for a free drink at someplace called The Mermaid. We thought this would be a trendy bar but maybe worth it for a free drink (backpacker thinking, you see). We tracked the place down and when we entered were accosted by a heavily made-up woman who looked at us with disdain as she pointed out we’d still need to pay the entry of $20. We removed our backpacker selves, fleeces and all, from there quite quickly and then looked back into the place to see that it contained mostly men, with just one other woman in evidence…and she was wearing basically underwear. Ah. (Though the voucher had come with a flyer advertising a ‘ladies night’, this being illustrated by naked male torsos. Anyway.) I must admit we cool girls finally just settled on a hot chocolate each, which we sipped in the hostel lobby while engaging in a bit more girl talk before bed.

Next stop on the Kramer itinerary was Napier. After a long bus ride, I arrived at was greeted by my friend from the night before and her friend from Scotland (they both are travelling on the Magic bus, a tour company to which they give mixed reviews; I was on the ol’ InterCity). I wiped the sweat from my brow as it was a sultry evening in Napier and headed out the door with them to get some dinner. Napier touts itself as the Art Deco city (because I believe it was flattened by an earthquake and then rebuilt in that style), and there was an Art Deco festival of sorts going on. Lots of old cars and older people prancing about in period costume.

After we ate we felt like a stroll. This walk incorporated a visit to the supermarket (the highlight of every backpacker’s day or night). This may not sound exciting. However, when we exited the supermarket we were suddenly lost. Yes, lost when exiting a supermarket we had just used. Hmm, anyway, the three adults eventually used their combined wits and the map to find the way back to the hostel. Which was just down the road. Ha. We were all tired, ok.

Next stop Taupo, and I shall be here two nights. They have a great big lake and all that. But look at this!

I have booked myself onto the Tongariro Crossing expedition and will be walking my socks off tomorrow. Weather report is good. Just need to get off this computer, make dinner and go to bed so I am bright and shiny for that 5:40 am pick up tomorrow. Ahhh…! 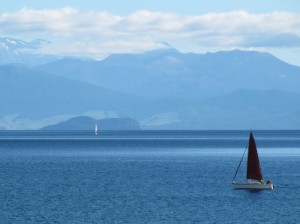