Heading north out of Christchurch, we parked up for the night near a beach and campground. Used the campground’s toilets on the sly, and the next morning asked about paying for a shower. They were more than happy for us to use the coin-operated showers and they were a bargain – only 50 cents. Good stuff! Ate breakfast in our van while a sparrow visited the back, bobbing into our pots and pans to see if there were any tasty morsels going spare.

We drove on towards Kaikoura, stopping off at a beach to take in the scenery and to allow me to  perform an impromptu dance. Talent, no?

Kaikoura is pretty and laidback, kinda quiet at the moment considering the time of year, but on the other hand, the weather is crap. (Very English – rain, grey skies – nooooo!) We decided to go for a full-on powered site round the back of the Lobster Inn. Really nice: open-air kitchen, power to charge our devices (cameras, etc.), friendly people about.

Yesterday’s highlight was whale watching. We weren’t sure how the weather would pan out, but even though the seas were choppy the trip went ahead. I was thankful for the sea sickness tablet I took beforehand as it was a bit rollercoastery at times. We saw loads of dusky dolphins, who came to swim alongside the boat and tease us (and 0ur cameras) with their speed and playfulness. We also saw some petrels and albatross – so impressive! 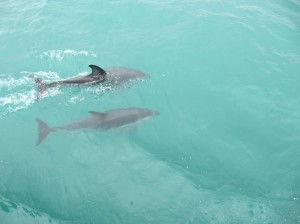 But the main target our attentions was the sperm whale population in the underwater canyon above which we were riding. One of the whales was feeding below and it was only a matter of time before he would surface…and finally he did and the excitement was on as we all tried to capture the moments on camera. Then all too soon he he flipped up his tail and was gone. Our time was running down and the crew turned to return to land…but then all of a sudden they made the quick decision to head back out. Word was he was going to resurface. And so he did…and I even caught his tail this time. And a beautiful one it is! His name, by the way, is Tiaki, which means ‘guardian’.

Once we had returned to shore, we went for some beers and food in Kaikoura. I tried the ‘seafood selection’ – lots of fried seafood, served with chips. I wish some of it had been labelled as I was curious exactly what I was eating… We had thought about going to see a band, as it was Saturday night after all, but it was a choice between a very quiet folksy thing and some sort of Australian reggae (I guess Kaikoura wasn’t rockin’ that night) so we opted for a walk instead, along the beach and along the road south.

Oh, how I love being by the sea…and walking along the beach, lost in thought, or free of thought. I think perhaps there is no heartache the ocean could not absorb.

2 thoughts on “Tiaki and dusky dolphins”